Going with the Flow

Anyone who has ever flown is probably familiar with the concept of turbulence. Yet understanding turbulent flow—how it develops, its intensity, and its properties—remains somewhat elusive. UT’s physicists have helped develop a new technique using excimers created by neutron capture to observe turbulence around macroscopic objects (an airplane, for example, or a ship). Their technique enables measurements of how turbulence behaves over space and time, and can be scaled to work in three dimensions. The work was published in Physical Review Letters (PRL) and was designated an Editor’s Suggestion.

In the world of fluid dynamics, laminar flow involves a fluid (a gas or liquid) that flows smoothly in parallel layers. Turbulence occurs when a fluid has something like hiccups: inconsistent speed with irregular fluctuations or mixing between layers. Vortices—where the flow revolves around an axis line—are also much more pronounced in this scenario. 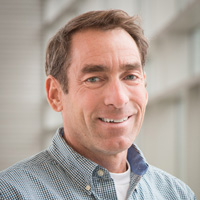 UT Physics Joint Faculty Professor Michael Fitzsimmons (left) is among the researchers who investigated this problem as outlined in the PRL paper. He explained why sorting out turbulence is of interest across disciplines—from transportation to medicine.

"If the flow could be made more laminar about a tanker, or airplane, or through a heart stent, there would be less drag" and more energy efficient, he said.

Scientists have tried to work through this problem before. To develop a model of turbulent flow, they’ve used tracers in liquid helium to measure velocity. Though only a micron or tens of microns in size, these tracers (polymer spheres and frozen hydrogen particles) are actually massive within this context. For reference, a human hair is 50 to 70 microns in diameter. So how could this possibly be too large?

Wei Guo is an Associate Professor of Mechanical Engineering at Florida State University and a co-author on the paper. He explained even if thinner than a hair on your head, these tracers are still big enough to bind easily with vortices while at the same time experiencing a strong drag force from the surrounding fluid.

"Therefore, it is very hard to interpret their motion in helium II," he explained. (Helium has two stable isotopes: 3He and 4He. Helium II consists of superfluid, or frictionless, and normal components of 4He. All had a role to play in this research, as we will see.)

To circumvent these issues, scientists have lately turned to a more nimble alternative for tracing flow: excimers.

An excimer is an unstable molecule formed by combining two smaller atoms in an excited bound state. The life time of the helium excimer is short—only about 13 s. Excimers are buoyant and have less mass than particles used in previous experiments, so they don’t disturb flow as much. They can be added to liquid helium with much less heat. They require considerably less energy to bind to the vortex cores, so they don’t perturb the motion and vortex configuration. In short, excimers are much less intrusive trackers.

The goal of this work was to find an experimental approach that could take advantage of excimers to observe flow including turbulence around macroscopic objects, with regard to space and time, in three dimensions. 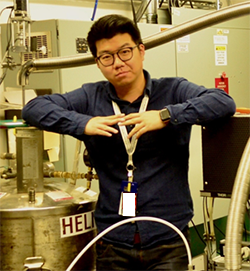 Xin Wen, a UT Physics Graduate Student and lead author on the paper (pictured right), explained that a Reynolds number establishes a sense of scale.

"It is defined as the product of fluid velocity and characteristic dimension of the object over the kinematic viscosity of the fluid. It can help predict flow patterns in different fluid flow situations," he said. "We can use (it) in the scaling of similar but different-sized flow situations."

The experimental setup comprised a cryostat that cooled a liquid 4He bath. Laser light came in from the one side, a neutron beam from the opposite side, and the image of fluorescence was captured with a camera. A glass bulb was added to the helium bath. The bulb was connected to a reservoir of 3He:4He gas. When liquid helium in the bath condensed, the gas from the reservoir condensed inside the glass bulb.

Fitzsimmons explained the nuances of helium’s family members. 3He has a large cross-section that makes it a good candidate for capturing neutrons. This in turn produces a proton and a triton, which create the ionizing radiation that gives rise to excimers. 4He, on the other hand, is mostly transparent to neutrons. Yet too much 3He leads to too many fluorescence events and muddles the results. The helium ratio has to hit a proper balance so that excimers can be created, the laser can induce them to fluoresce, and researchers can then follow those excimers to understand what’s going on in terms of how a fluid flows. Fitzsimmons explained that the normal component of helium II, which has friction, drags around the excimers, leaving a trail of fluorescence for scientists to photograph. This new method enables them to observe turbulence.

The next step, as Fitzsimmons explained, is to create this flow and watch how the fluorescence moves with time. And because they’re able to generate a large volume of excimers, they can, in principle, produce three-dimensional images and point-to-point correlation studies across a replica object. While COVID-19 has limited scientists’ access to their labs, they are still working on this research. Fitzsimmons explained they’re doing data analysis and using machine learning algorithms to identify centroids in excimer clouds with an eye on tracking them versus time.

The research is published in "Imaging Fluorescence of He_{2}^{*} Excimers Created by Neutron Capture in Liquid Helium II." It was selected as an Editor’s Suggestion: a designation given to papers the editors find interesting, important, and well-written that would appeal to a broad range of scientists. Lead author Xin Wen is a fourth-year graduate student and the 2020 recipient of the physics department’s Paul Stelson Fellowship for Outstanding Beginning Research. In addition to Wen and Fitzsimmons, other UT authors are Professors Anthony Mezzacappa, Ryan Glasby and Geoff Greene. They were joined by colleagues from Oak Ridge National Laboratory, Florida State University, and the UT Department of Mechanical, Aerospace, and Biomedical Engineering.